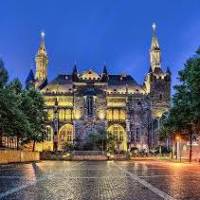 Aachen - is a spa and border city in North Rhine-Westphalia, Germany. Aachen is the westernmost city in Germany, located near the borders with Belgium and the Netherlands, 61 km (38 mi) west south west of Cologne in a former coal-mining area. Aachen's industries include science, engineering and information technology. In 2009, Aachen was ranked eighth among cities in Germany for innovation.

Aachen is located in the middle of the Meuse–Rhine Euroregion, close to the border tripoint of Germany, the Netherlands, and Belgium. The city of Heerlen in the Netherlands lies nearby, as does Eupen, the capital of the German-speaking Community of Belgium, both located about 20 km (12.4 mi) from Aachen's city centre. Aachen lies near the head of the open valley of the River Wurm (which today flows through the city in canalised form), part of the larger basin of the River Meuse, and about 30 km (19 mi) north of the High Fens, which form the northern edge of the Eifel uplands of the Rhenish Massif.